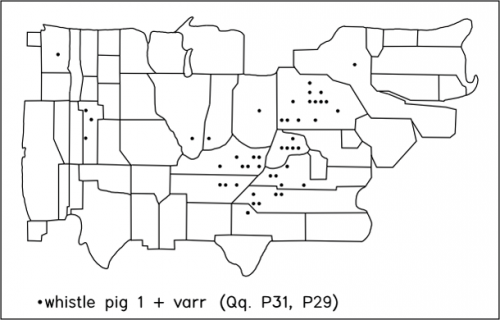 2 = ground squirrel n b. chiefly ID
2004 Jrl. Star (Peoria IL) 27 Feb sec C 5 (Internet), The Franklin’s ground squirrel is on its way to being a state threatened species. . . That may lead to additional research about the “whistle pig,” a nickname referring to the squirrel’s distinct trilling call. 2005 Airman Feb 47 ID, [Caption:] The high desert is. . . home to a cannibalistic ground squirrel the locals call a “whistle pig.” 2008 DARE File—Internet ID, Never heard that term [=potgut] before but, Sounds like the same critter called “whistle pigs” here in Idaho, IE Townsends ground squirrel. Ibid ID, I went over to Kuna, which is in Idaho. . . The whistle pigs are out in force. I did not know what a whistle pig was either until we moved up here. They look like miniature prairie dogs that are not much bigger than a roll of quarters but are actually a ground squirrel and they give an alarm whistle, hence the name. . . It’s a funny, very faint whistle they have and as you walk along you constantly hear this far off sounding whistle. Ibid ID, Its a purpose-built whistle pig gun. (Whistle pig = Columbian ground squirrel. Think of a 1/4 scale prairie dog.) Ibid ID, I live out here in Idaho, and we have these damn little things called “whistle pigs”. I’m not sure what they are exactly, but they look just like prairie dogs, but about a quarter of the size. . . They live in there little wholes and have towns just like prairie dogs.
3 = prairie dog n. chiefly ID
2004 in 2008 DARE File—Internet ID, We call them [=prairie dogs] rock chucks, picket pens, whistle pigs. 2007 DARE File ID, [Caption:] Whistle pig. . . [Response:] Ummmm. . . that is a prarie [sic] dog, a whistle pig is a ground hog or wood chuck. 2008 Ibid ID, [He] told us a story of living in Idaho and passing the time by sitting on his back porch, cocktail and shotgun in hand, and shooting at the prairie dogs that were sticking their heads out of their holes, whistling at one another. Since prairie dogs are also known as whistle pigs, and we thought this was a funny story, we named the band Whistle Pigs.