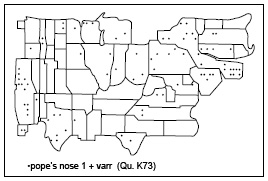 1860 Morris Tales Masonic Life 289 KY, A rush was incontinently made to the hens, whose mighty skeletons were presently heard cracking with the dental apparatus of twenty-eight pair of jaws, until there wasn’t a pope’s nose left of the half dozen. 1899 (1912) Green VA Folk-Speech 330, Pope’s nose. . . The fleshy part of the tail of a bird; the part on which the tail-feathers are borne. “The part that gets over the fence last.”  1937 AmSp 12.104 eNE [Farm terms], The wish bone and plow bone of a fried chicken are well known; pope’s nose, a name for the tail, is generally known.  1951 West Witch Diggers 72 IN, I’ve fobbed them paupers off tonight with nothing but necks and pope’s-noses.  1954 Forbes Rainbow 329 NEng, Here was the pope’s nose and the neck, and the first batch of gravy that came out too greasy.  1965–70 DARE(Qu. K73, . . Names . . for the rump of a cooked chicken) 83 Infs, scattered, but esp Nth, N Midl, CA, TX, Pope’s nose; MD34, Pope; IN32, Poop-nose. 1979 UpCountry Sept 38, Julia Child . . caused a tempest in a chicken pot . . when she referred to the tail of the bird as “the pope’s nose.”  [1982 NADS Letters , I have a query about an expression which puzzles me—‘poke’s nose’. This is what my late grandmother called the tail end of a cooked turkey or chicken. (I never heard it used in connection with a live bird, but then there weren’t any around.) The ‘nose’ part seems to make sense because of the shape, but I wonder what a ‘poke’ is. (My grandmother was born in Missouri in 1887 and lived in Oklahoma, Kansas and Arkansas. She only came to Michigan when she was around 50.)] 1989 DARE File neWI, The flopping tail of a (raw or cooked) plucked chicken or turkey is called the Pope’s nose by members of my husband’s large Dutch/Catholic family in DePere, Wisconsin. They claim the expression is fairly common within the large Dutch and Belgian Catholic population in the Fox River Valley area. 1999 Ibid OR, Pope’s nose—My grandfather used to say it rather often, much to the annoyance of my grandmother, so I guess you have at least one cite from Oregon. 1999 [see 2 below].
2  The heel of a loaf of bread.1999 DARE File, When I was growing up, the “Pope’s nose” was a term for the heel . . of a loaf of bread. . . When I started going with a gal I met in college . . I was delighted to discover that she understood what I mean[t] when I said “Pope’s nose”—but she added “some people say that it means the part of the chicken that crosses the fence last.” . . Peg’s early years were spent in Minnesota; then her family spent three or four years in Tennessee; then they returned to the family home in Illinois. I was born in Chicago, with a native Chicago father and a mother born in the Ukraine. 2000 Ibid csWI, I was slicing bread the other day and my husband said to me, “Save me the Pope’s Nose,” meaning the end of the [Italian] bread which is pointed.