Skip to main content
University of Wisconsin–Madison
gallinipper n Also galknipper, gallinapper, gallon dipper, ~ nipper, gan(ni)nipper, gollynipper, gullynapper, gurnipper; for addit varr see quots [Etym unknown; the orig form has clearly been much altered by folk-etym and other processes, but cf gally v.]
1  Any of several insects, as:
a A large mosquito n B1 of the genus Megarhinus or Psorophora, esp P. ciliata. chiefly Sth, S Midl, esp S Atl See Map Also called gabber napper n, galliwopper n, granny-nipper n 1  Cf horse mosquito n Note: Some of these mosquitoes do not bite.
1634 Wood New Engl. Prospect 46, The third is Gurnipper which is a small blacke fly no bigger than a flea; her biting causeth an itching upon the hands or face, which provoketh scratching. 1709 in 1851 Prot. Episc. Hist. Soc. Coll. 64 NJ, Poor brother Jenkins was baited to death with musquitoes, and blood thirsty Gal-Knippers, which would not let him rest night nor day. 1801 Port Folio (Oldschool) 1.40/3 Philadelphia PA, Musquitos, Ants and Gnats, begin / With Fire-flies to assail his skin,/ Of Gallinippers too a monstrous host. These Gallinippers . . / Who toil not for themselves, or earn their food,/ But suck the hungry peasant’s blood,/ ’Mongst tiny gnats a giant race. 1810 Cuming Sketches 275 cwMS, There are but few musquitoes on the dry part, but a low, drowned point . . swarms with them, and many of the largest size, called gannipers. 1831 Daily Eve. Transcript (Boston MA) NY, I have been pricked by a stiletto—by the gallon-nipper, by the blood-sucker, and the hornet. 1834 Life Andrew Jackson 115, It was good for ’em it warn’t in July. Had it bin, the Kentuckians mite’ve bin spar’d, as the gallinippers . . wou’d’ve settled the hash, and the gineral woud’ve lost all the glory without a shot. 1890 Howells Boy’s Town 31 OH, Fiery dragons could not have kept them out; gallynippers, whatever they were, certainly did not. 1901 Howard Insect Book 102, The mosquitoes of [the genera] Megarhinus and Psorophora are very large, and include the forms known in various parts of the country as gallinippers. 1906 Casey Parson’s Boys 67 sIL (as of c1860), Some lusty “Gallinippers”—so called, the victim had explained to the boys because at each “nip” they took a gallon—were trying to puncture his bronzed skin. 1930 Stoney–Shelby Black Genesis 179 seSC, Skeeter an’ gallinipper jine han’s to tek place o’ dem, an’ suck we blood. 1960 Criswell Resp. to PADS 20 Ozarks, Gallnipper is used for a large insect which may be a very large mosquito, but it does not seem to me to be that. 1965–70 DARE (Qu. R15b, Any names for an extra-big mosquito?) 152 Infs, chiefly Sth, S Midl, esp S Atl, Gallinipper; 13 Infs, chiefly Sth, S Midl, Gallinapper; AR32, MO8, 19, Galnipper; SC2, Gallinipper [ˈgælɪnɪpə]; gallon dippers [ˈgæləndɪpəz], as a child; IL69, Gollynipper; IL114, Gullynapper. 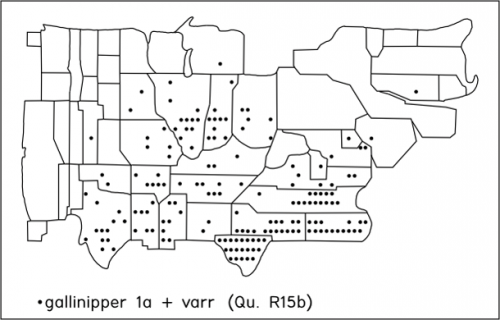 b  A large biting fly such as those of the genus Stomoxys. obs Cf Georgia piercer n
1674 Josselyn Two Voyages 122, There is another sort of fly called a Gurnipper that are like our horse-flyes, and will bite desperately. 1790 PA Packet & Daily Advt. (Philadelphia) 11 Oct 3/4 PA, A ganninipper is a kind of large horse-fly, frequent in pine woods, the sting of which is extremely poisonous as well as painful. [1829 Mactaggart 3 Yrs. in Canada 1.186, The gadnipper, a large species of gadfly, is also common, but not so troublesome as those above described.] 1862 Harper’s New Mth. Mag. 25.737/1, The Stomoxys georgina—“Georgia Piercer,” or “Gallinipper”— . . if curses could annihilate it, would soon be driven from off the earth.
c  = crane fly n.
1906 DN 3.137 nwAR, Gally-nipper. . . An insect resembling, but larger than, a mosquito. 1930 Shoemaker 1300 Words 26 cPA Mts (as of c1900), Gala-nipper—A huge insect of the mosquito type, but harmless. 1938 Brimley Insects NC 314, The Crane Flies. Long-legged flies somewhat resembling mosquitoes in general appearance, but without scales on the wings and often much larger, being then sometimes mistaken for giant mosquitoes and called gallinippers. None however can bite or suck blood. 1938 Hench Coll. VA, Gallinippers. . . Great big mosquitoes with long trailing legs. 1940 Teale Insects 153, A common insect often mistaken for a large and ferocious mosquito . . is the crane fly. . . Its gangling, awkward, threadlike legs trail, behind it when it flies. In the sandhill country of northern Indiana, we used to call crane flies “gallinippers” and thought they were giants of the mosquito tribe. 1942 McAtee Dial. Grant Co. IN 27 (as of 1890s), Gallinipper . . a long-legged fly (crane-fly) sometimes seen in houses; the folk etymology differs from that of N.I.D. connecting the word with galley, being gal nipper; crane-flies, however, do not bite; the word is not used for the real biters—mosquitoes—as usually reported elsewhere. 1950 WELS Suppl. WI, Gallynapper—large mosquito, three times the size of a mosquito; fly size, but very slender in shape, like mosquito. 1953 Randolph–Wilson Down in Holler 246 Ozarks, Gallynipper. . . The original gallynipper was a gigantic mosquito, according to the old-timers. The term is applied to other flying insects, particularly the crane flies (Tipulidae), which look like mosquitoes, but are nearly two inches long. 1963 TN Folk Lore Soc. Bulletin 29.82, Bugs—The general name for small life is bugs. This term includes spiders; grand-daddies or daddy-longlegs; crane-flies or gallinippers; . . and others not so picturesquely named.
d  A dragonfly n.
1967 DARE (Qu. R2, What other names do you have around here for the dragonfly?) Inf MO11, Galnipper. 1987 DARE File, In . . some records which I [=Gordon Wood] collected . . in the 1940s, I have come across . . gallinipper (dragon fly) from Escambia County, Alabama.
2  Transf: see quot.
1944 Duncan Mentor Graham 126 IL, Many a rural gallinipper hove in, a “dominacker” rooster under his arm to put up to fight for drinks.