A small cake or thick cracker, generally made with flour and shortening but no leavening, thoroughly kneaded by beating or passing through a rolling machine, and baked until dry, with little or no browning—also used as a mass noun.
1854 (1943) Lomax Leaves Diary 26 DC, Mrs. Lee arrived with a large box of edibles for our boys to take to West Point. It contained Virginia ham, beaten biscuits, cakes and all manner of good things. 1870 Queen Kitchen 23 MD, Beat Biscuit. 1 quart of flour, rub in it well 1 table spoon of lard, 1 pint of milk, 1 tea cup of cold water, 1 tea spoon of salt, work all well together, and then beat the dough until it blisters, then shape into small round biscuits and bake. 1885 Daily News (Frederick MD) 29 Aug 1/1, [Advt:] Biscuit Machines.—People who suffer with dyspepsia will find that beat biscuits are just what they want; you cannot make them nicely without a biscuit machine to grind the dough. 1894 Cable John March 12 LA, I wish I had just about two dozen of his beat biscuit right now. He didn’t have his equal in camp for beat biscuit. 1912 Green VA Folk-Speech 78, Beat-biscuit. . . An unrisen biscuit. 1929 (1951) Faulkner Sartoris 26 MS, A thin woman in a funereal purple turban, poising a beaten biscuit heaped with mayonnaise. 1931 Sun (Baltimore MD) 1 May 12/7 (Hench Coll.), Maryland biscuits? I object to that description. Beaten biscuits. They make them just as good in Virginia! c1937 in 1977 Amer. Slave Suppl. 1 1.67 AL, My mammy made de best beaten biscuit and de best pound cake. 1965–70 DARE (Qu. H19, What do you mean by a biscuit?) 28 Infs, chiefly Sth, S Midl, Beaten biscuit(s); MD19, Beat biscuit—dough beaten with an ax for hours; (Qu. H18, . . Special kinds of bread) Infs AR8, KY94, MD7, 27, MS54, Beaten biscuit(s). 1968 DARE Tape MD27, The beaten biscuits were made of flour and I think eggs. I can’t tell you the exact recipe, but after they sat so long, you beat them with something. You had to beat them so long before they were baked. 1988 Paris News (TX) 27 July sec C 1/1, Charles Bauer makes honest-to-goodness beaten biscuits. Only instead of beating the biscuits . . , he rolls the dough through his grandmother’s beaten biscuit machine. 2002 in 2015 DARE File—Internet, Beaten biscuits are my favorite thing in the world. I have spent 3 years trying to come up with a means of making beaten biscuits that I won’t regret the next day. . . I’ve usually had to use the side of an axehead (per my grandmother) and two people. I tried the food processor method and while it’s not bad, it’s not really a beaten biscuit. 2015 Ibid KY, [Advt:] These old-fashioned southern style beaten biscuits are a must for true Southern Hospitality. . . Baked deep in the heart in [sic] the Bluegrass region of Kentucky for over fifty years, these beaten biscuits hail from Winchester, Kentucky. . . Each biscuit is about 1.5″ across, with 12 biscuits to a 4oz. package. 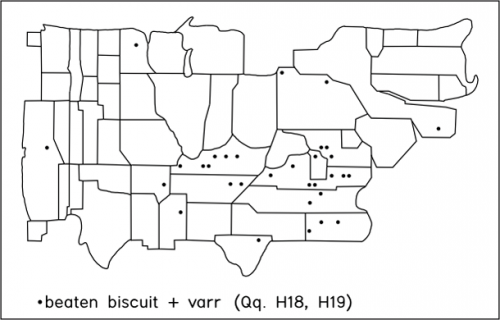