sunup n [There are scattered attestations in Brit use 1572→ (not in current OED), but the alleged Yorkshire ex in EDD at sun sb. 1.(36) is doubtful.] widespread, but less freq Nth See Map Cf sundown n

The time when the sun rises. 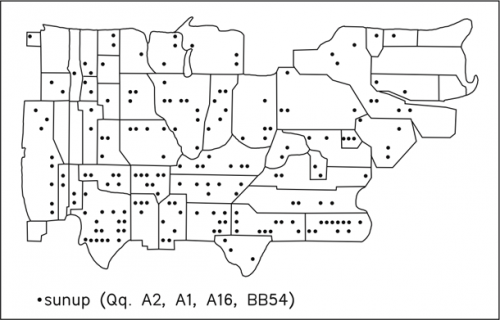 1572 Gwalther An Hundred, Threescore and Fiftene Homolyes or Sermons 737, He . . beginneth a newe sermon which he continueth untill morning, and then by sunne up, taketh his iourney.

1702 Privilegia Londini (London, Brown & Walthoe) 377, That no Trincke shall stand to fish for Whitings till the Ember-Week before Michaelmas yearly. . . And upon Saturday Sun up to wash off his Net, hale up, and go home, and not to return to his Labour again til Monday-Morning day-light.