The following two maps show DARE‘s base map with state codes compared to a geographical map of the United States. Hawaii and Alaska are tacked on to the West Coast, lower left and upper left respectively, on DARE‘s map. The DARE map is based on settlement history, and on population density as of the 1960s. It shows only the responses DARE collected during the fieldwork in 1965-70. Other evidence (mainly the other citations shown in the entries) is not included in DARE maps.

There were at least two questionnaires completed in each state. States with a low population such as Nevada are represented by two interviews, while populous states such as New York are represented by over eighty. Thus the size of the states is skewed, but the geographical relationship of the states to each other is maintained. Such maps are contained within the columns of dictionary text to demonstrate the regionality of certain entries. 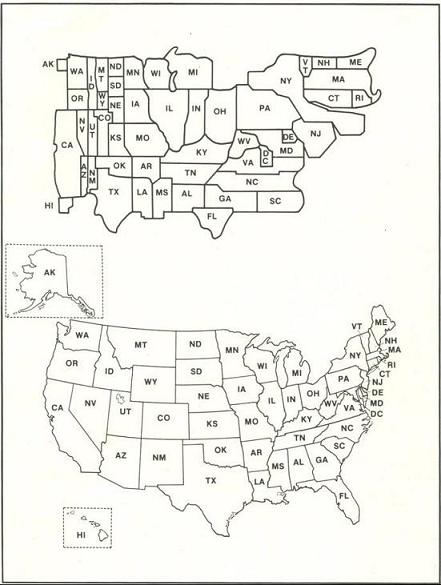 The dots on the following map show the positions of DARE‘s Informants on the map; if all Informants answered the question with the same response, a map would look like this. Note that most of the space within the states is filled with dots, except for a few empty spots in states less populous such as Nevada, Idaho, and Montana, and in cases where the attempt to maintain the very rough geographical outlines required adding tips and points to some states. 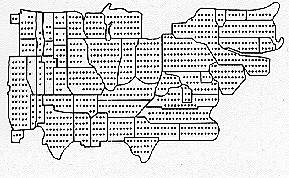 Click here to see an example of how a DARE map is used in an entry. Or here.

The maps from Volume VI are now available for free at daredictionary.com