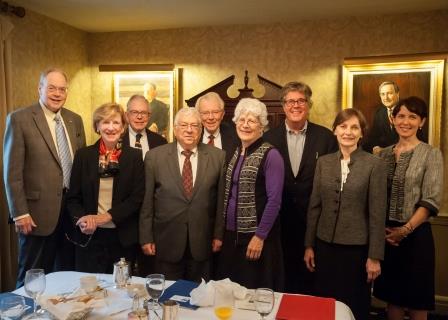 DARE‘s Board of Visitors is made up of people who share a belief in the value of the project and a strong desire to see it continue. They meet twice yearly at locations around the country to discuss development ideas and the editorial progress being made on the Dictionary. The members of the Board, as of April 2012, are listed below. We also wish to thank and recognize our Emeritus Board Members and pay tribute to our former Board Members.

GREG ALFUS is Professor Emeritus at McHenry County Community College in Woodstock, Illinois. He received his B.A. from the University of Wisconsin–Stevens Point and his M.S.E.D. from Northern Illinois University. Professor Alfus has done linguistic studies of American literature and was for many years the Chair of the English Department and of the Academic Success Center.

RICHARD EKMAN is President of the Council of Independent Colleges in Washington, D.C. He was previously Vice-President of Programs at the Atlantic Philanthropic Service Company, Inc. in New York. He has also served as Secretary of the Andrew W. Mellon Foundation and as Director of the Division of Research Programs at the National Endowment for the Humanities. Mr. Ekman received his Ph.D. from Harvard University. He was awarded the W.E.B. Du Bois Medal from Harvard in 2000.

HARLAN ELLISON is a multiple-award-winning author, lecturer, columnist, and social critic. He has written or edited more than seventy-five books in his long career. He has won the Mystery Writers of America Edgar Allan Poe Award twice, the Silver Pen for First Amendment Journalism from PEN, the international writers’ union, and is the only scenarist in Hollywood to win the Writers Guild of America award for Most Outstanding Teleplay four times for solo work. Among his best-known titles, in which he revels in the proper use of Americanese, are Deathbird Stories, Slippage, An Edge In My Voice, and two books of television criticism, The Glass Teat and The Other Glass Teat, which are used in media classes at over 200 American universities. You can visit him in Webderland at harlanellison.com.

MORRIS F. GOODMAN is Professor Emeritus in the Linguistics Department at Northwestern University. His specialties include historical linguistics, history of linguistics, pidgins and creoles, and African languages. Professor Goodman received his Ph.D. from Columbia University. He was a contributor to the 1987 Random House Dictionary of the English Language and wrote an article on African languages for the Encyclopedia Brittanica III.

ROBERT D. KING is Professor of Linguistics at the University of Texas at Austin, where he has also served as Dean of the College of Liberal Arts. Professor King received his Ph.D. from the University of Wisconsin. His research interests include the Yiddish language, the politics of language, and the language of politics in India. He has written a number of books, including Nehru and the Language Politics of India and Historical Linguistics and Generative Grammar.

DAVID MARANISS is an author and journalist. He is Associate Editor of the Washington Post, where he has worked since 1977. Mr. Maraniss has won virtually every major award in journalism, including the 1993 Pulitzer Prize for national reporting for articles on the life and career of Bill Clinton. Mr. Maraniss has written many books, including First in His Class: A Biography of Bill Clinton; When Pride Still Mattered: A Life of Vince Lombardi; They Marched into Sunlight; Clemente: The Passion and Grace of Baseball’s Last Hero; and Rome 1960. Learn more at davidmaraniss.com.

ALLAN METCALF serves as an ex officio member of the Board. He is professor of English at MacMurray College, executive secretary of the American Dialect Society, forensic linguist, and author of From Skedaddle to Selfie: Words of the Generations, as well as OK: The Improbable Story of America’s Greatest Word and five other books on language.

JACQUELYN MITCHARD is the author of many books, including the best seller The Deep End of the Ocean. A newspaper reporter since 1976, Ms. Mitchard wrote a nationally syndicated column, “The Rest of Us,” for more than two decades. Ms. Mitchard has worked as a contributing editor for Parenting magazine and a columnist for TV Guide. She contributes to the new Disney parenthood magazine, Wondertime, and has recently begun writing novels for young adults and children. You can see what she’s been up to lately at jacquelynmitchard.com.

CYNTHIA L. MOORE was an attorney in Arlington, Virginia, for twenty years, specializing in estate planning and government relations services for pension plans as well as providing advice on trademark issues. She received her law degree from Case Western Reserve University. Her love for languages inspired her participation in the Dictionary Society of North America, and she has published an article in the Society’s journal, Dictionaries. Recently Ms. Moore has changed directions. After spending time in Mexico and Central America learning Spanish “on the ground,” she enrolled at the University of Florida and earned masters’ degrees in Spanish linguistics and education. The degrees provide her with new skills and knowledge that she uses both internationally and domestically. In the international area, she works on nonprofit activities in Guatemala that focus on education, microfinance, and water quality. In the domestic area, her efforts are concentrated on service learning and financial literacy for young people.

ROBERT H. MOORE worked as Senior Vice-President of Alexander and Alexander Services, Inc. in Washington, D.C. and New York. He was also Chairman and President of A&A Government and Industry Affairs, Inc. Mr. Moore received his Ph.D. from the University of Wisconsin. He has taught there, at the Military Academy at West Point, and on the graduate faculty of the University of Maryland. He is the author, with John A. Bogardus, Jr., of Spreading the Risks: Insuring the American Experience. Mr. Moore has been associated with the DARE project since 1966.

JOHN A. SHEA was the major partner in a small investment advisory firm in Chicago, Illinois. Currently he is a financial adviser with William Blair and Company in Chicago. Previous to that, he taught American literature at a number of liberal arts colleges in Illinois. Mr. Shea received his M.A. and Ph.D. from Indiana University–Bloomington. He also received an M.B.A. from Loyola University in Chicago. He is a member of the board of directors of the Old Town School of Folk Music in Chicago.

SIMON WINCHESTER is the author of many books, including the best seller The Professor and the Madman, which details the relationship between James Murray and W.C. Minor during the making of the Oxford English Dictionary. Mr. Winchester is also a correspondent and Asia-Pacific Editor for Condé Nast Traveler magazine and has worked as a correspondent for other publications in the United Kingdom, including the Sunday Times and the Guardian. Learn more about his recent works at simonwinchester.com.

BEN ZIMMER is a language commentator, linguist, and lexicographer. He is the executive producer of two language-related websites, VisualThesaurus.com and Vocabulary.com. He writes a biweekly language column for the Boston Globe and is the former “On Language” columnist for the New York Times Magazine. Mr. Zimmer is a consultant to the Oxford English Dictionary and was formerly editor of American dictionaries at Oxford University Press. He also serves as chair of the New Words Committee of the American Dialect Society.